John Manning Wells was chosen as the 2022 Founder of the Year. As part of the Downers Grove Founders Day activities, his selection was celebrated at a ceremony at the Downers Grove Main Street Cemetery on Saturday morning, May 7, 2022, at the site of his headstone. Speaking at the event were Lois Sterba, Downers Grove Historcal Society Historian, Girl Scouts from a local Downers Grove troop, and Linda Painter, Forest Preserve of DuPage County Commissioner. The ceremony may be viewed on the DGHS YouTube Channel. 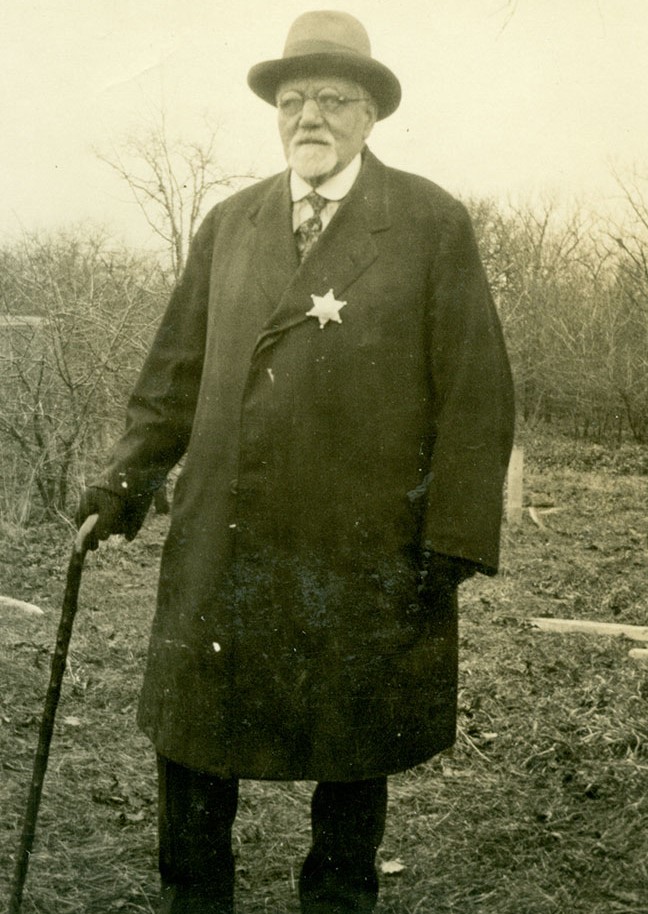 John Manning Wells was born in West Walton, England on November 30, 1848. He was one of six children. When he was 12 years old, John came to America by way of a sailing ship that took 6 weeks. Once in Chicago, he came by a lumber wagon to the Cass area to stay with his brother Fred. His early years were spent as a farm worker and brick maker attending local schools when he had time.

In 1871, John met Arvill Bond at a dance in Naperville. They soon married and moved to Downers Grove in 1875. They were the parents of five children. Sadly, two daughters died at a young age: Gracie, in 1883, and Amy in 1894. Their three sons were Charles, Walter, and William. William was the first from Downers Grove to enlist for the Spanish American War in 1898 and later worked for the National Wax Company. Walter worked for the railroad and Charles worked as an accountant. In honor of her son, his mother Arvilla joined the Auxiliary of the United Spanish War Veterans.

John was employed by the railroad as a station agent, a job he would hold for 30 years. In addition to this job, John opened a real estate, insurance and renting agency here in 1890. He also served as village clerk and collector. His reputation as a businessman showed he was always public-spirited and worked to improve the community. He was also the officer of finance and member of the Modern Woodmen of America, a fraternal organization to provide social and financial support after the Civil War. This group was one of the first to provide benefits that included insurance, sickness, accident death and burial policies. Those who belonged were provided with a tree stone grave marker when they died.

Friend of the Girl Scouts

John was concerned about the growth of the village and wanted to make sure enough land would be set aside for the creation of forest preserves in the county. By 1920, land was being purchased in Downers Grove to establish the Maple Grove Forest Preserve and John became caretaker of the area. It was in Maple Grove that he proposed building a cabin for the use of the local Girl Scout troops. After the deaths of his two young daughters Gracie and Amy he was committed to having the cabin built to provide a place for the girl scouts to hold activities in the forest preserve. Raising money from local businesses and residents the cabin was dedicated on July 26,1926 and dedicated to John by naming it the Daddy Wells Cabin. The scouts also honored him by giving him a special Thank You Badge, the highest honor to be given to someone who helps the scouts. Wells did not forget about the Boy Scouts. In 1925, he helped raise several thousand dollars for them to purchase improvements at their cabin in Maple Grove. He felt scouting in Downers Grove helped train the youth in many good qualities and keep them physically fit and morally straight. 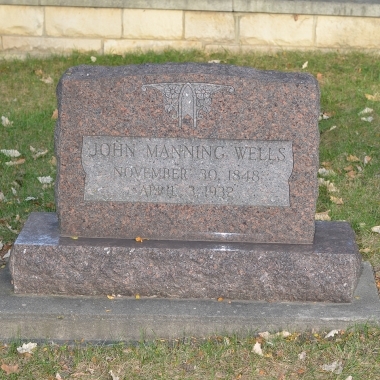 John lived in Downers Grove for more than 50 years. When he died in 1932, he was buried in the Main Street Cemetery, next to his daughters and mother. The Girl Scouts did not forget about him and every Memorial Day they brought flowers to his grave. In 1982 the scouts realized Daddy Wells was sharing the monument with his other family members, so they decided to raise money to place a special monument from them on his grave honoring his devotion to the Girl Scouts.